NHL teams get creative to celebrate Halloween with fans

Coyotes, Blues, Canadiens set up events to get in physically distant spooky spirit 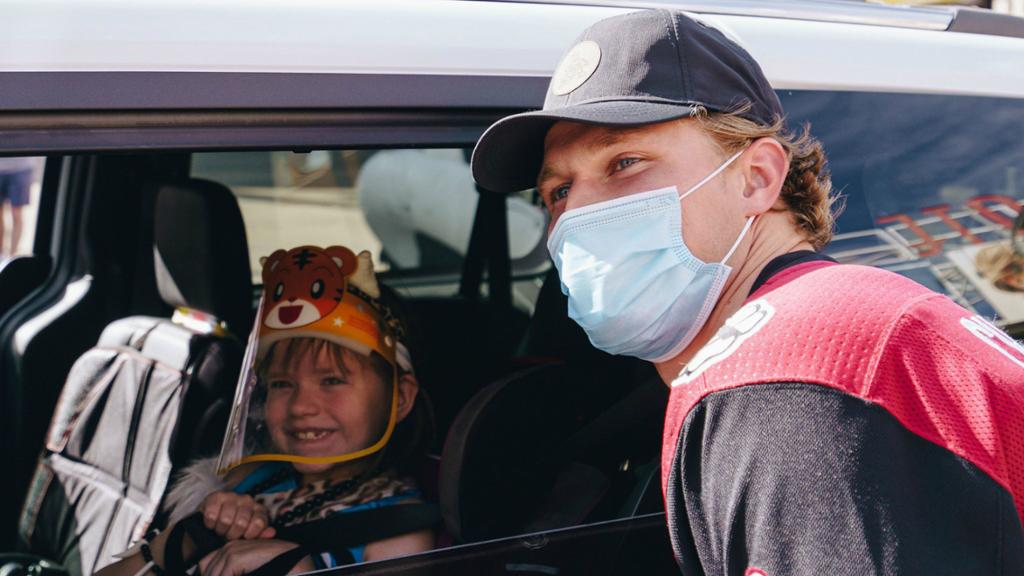 NHL teams can't celebrate Halloween like they normally do with big parties with players in elaborate costumes, but a few found some creative ways to get into the spirit.

Tweet from @ArizonaCoyotes: Our Drive Thru Trick-or-Treat event is underway! 👻 Come visit @j_chychrun7 until 12 PM to get a goodie bag. pic.twitter.com/M6AT1b2pm4

Tweet from @ArizonaCoyotes: You all really want candy. 😱Make sure you get here soon while supplies last. pic.twitter.com/lKggGpSfS4

More than 1,000 kids and their families came out to meet Chychrun and get some candy and Coyotes collectibles. The Arizona Coyotes Foundation organized the event at Gila River Arena.

"I was looking forward to this," Chychrun told the Coyotes' website. "We've missed our fans very much. It's been a long time since we had any interaction with them, and (Halloween) is also a fun holiday. So, it was nice to hand out some candy and mingle a little bit."

Tweet from @ArizonaCoyotes: Thank you to everyone who came to our Drive Thru Trick-or-Treat this morning! We can���t wait for the day we can see you all at the arena for a game again. Happy Howloween! 🎃 pic.twitter.com/6QpCmo000Q

In Montreal, Youppi! paid a visit to one lucky Canadiens kids club member who won a contest to get some quality time with the legendary mascot.

The Canadiens also shared a bunch of photos of their players as kids in their best Halloween costumes.

The St. Louis Blues, who usually visit to a children's hospital for Halloween, sent candy and video messages from players, including this one from forward David Perron.

"I wish I could be there to celebrate Halloween with you this year," Perron said in the video. "But since I can't, I decided to send you some treats and my friends with (St. Louis) Children's Hospital will give it to you. Happy Halloween and I hope you have a fun day."

Tweet from @StLouisBlues: Blues players couldn't trick-or-treat with patients at @STLChildrens this year due to COVID-19, so they taped video messages and had candy sent to the hospital instead. #stlblues #HockeyHalloween pic.twitter.com/iZOL668IOY

The Bruins also made the most of their annual themed children's hospital visit. Several players, including forward Patrice Bergeron as an impeccable Elmo, dressed up as Sesame Street characters for a video chat with kids at a Boston-area children's hospital on Thursday.