Over The Boards | Dan Rosen 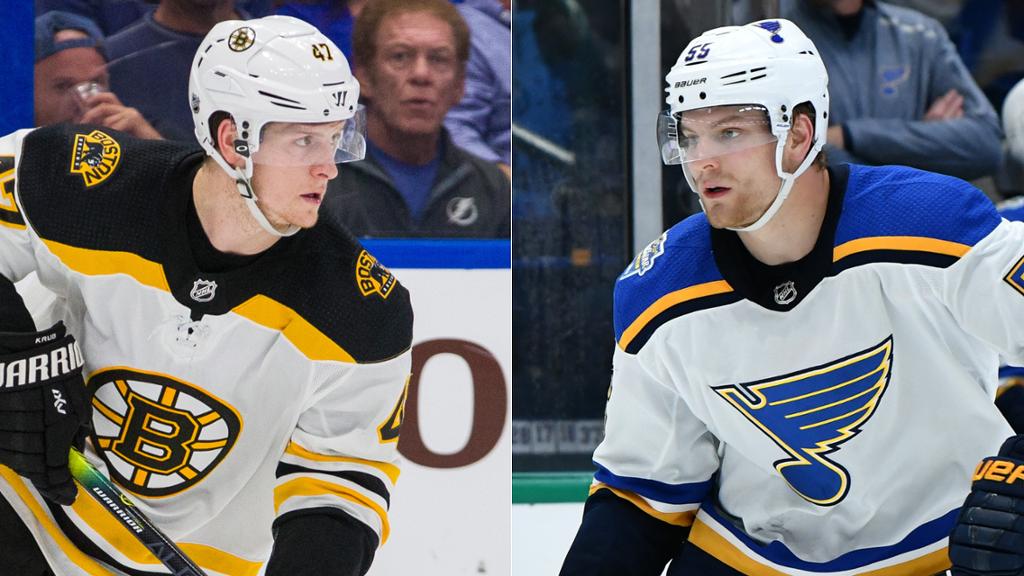 Here is the Nov. 4 edition of the mailbag. NHL.com staff writer Mike Zeisberger is pinch-hitting for senior writer Dan Rosen this week. If you have a question, tweet it to @drosennhl and use #OverTheBoards.

What do you think the St. Louis Blues defense should look like? Many think Torey Krug should pair with Colton Parayko but I think he should pair with Justin Faulk to provide a more balanced defense, both in terms of total ice time and abilities. -- @HawaiiBluesfan

No one can replace what former captain Alex Pietrangelo brought to the Blues. He was a leader in the dressing room and on the ice, but signed a seven-year, $61.6 million contract ($8.8 million average annual value) with the Vegas Golden Knights on Oct. 12. But Krug, who agreed to a seven-year, $45.5 million contract ($6.5 million average annual value) with St. Louis on Oct. 9 after playing his first nine NHL seasons with the Boston Bruins, is an outstanding player in his own right. I like a potential Krug-Colton Parayko defense pair. Krug (5-foot-9, 186 pounds) is all about speed and would be an ideal complement to the much bigger Parayko (6-6, 230), who I feel is underrated, especially when it comes to his play in the defensive zone. Parayko's physical style and defense-first attitude would allow Krug the freedom to skate up the ice and be creative, which is one of the things he does best. Such a setup would allow Marco Scandella and Faulk to form the second pair. Scandella (6-3, 212) would take care of the defensive end and allow Faulk (6-foot, 217) to jump into the play. When your top two pairs are Krug-Parayko and Scandella-Faulk, it seems like an ideal fit for 5-on-5 play.

Video: NHL Tonight takes a look at the Blues offseason

Toronto Maple Leafs general manager Kyle Dubas has once again signed some free agents in an attempt to shore up the Leafs' lineup. With so many "stars" on their team, could it be the end of Dubas in Toronto if this team fails again to succeed in the playoffs? -- @theashcity

I was born and raised in the Toronto area and still live there, so I know firsthand the fans' patience is starting to wear thin with Dubas. But I will give him credit for being flexible in his thinking when it comes to addressing the Maple Leafs' roster issues during the offseason. Dubas is one of the smart young minds in the game and is an advocate of hustle over muscle. But after the Maple Leafs lost to the Columbus Blue Jackets in the best-of-5 Stanley Cup Qualifiers, Toronto sought out experience and grit. Forwards Wayne Simmonds and Joe Thornton and defenseman TJ Brodie were signed as free agents in hopes of making the Maple Leafs, to use Dubas' words, "A more difficult team to play against."

Toronto has not won a postseason series since 2004 and that has to change, especially with forwards Auston Matthews, Mitchell Marner and William Nylander and defenseman Morgan Rielly on the roster. Those four are part of a Maple Leafs team that has been unable to take the next step in the four seasons since Matthews was selected with the No. 1 pick of the 2016 NHL Draft. But will the additions of Simmonds, Thornton and Brodie, all of whom are looking to win the Stanley Cup for the first time, be enough? If the Maple Leafs miss the playoffs or make another early exit, Dubas could start feeling some heat. The final decision likely will rest with team president Brendan Shanahan, who hired Dubas to replace Lou Lamoriello as GM on May 11, 2018, and has backed him ever since. If things go south, however, that could change.

Video: The guys break down the Maple Leafs offseason outlook

There are always debates over top defensemen lists due to how you prioritize offense vs. defense. Should they introduce an NHL award for the top offensive defenseman, much like the Selke Trophy for forwards? Then defense could be priority for Best Defenseman. -- @Jimmy06243829

This is a very timely debate with NHL Network revealing Sunday its list of the League's top 20 defensemen. I was wary when the concept of a separate award for the top-scoring defenseman was mentioned to me years ago, but I've heard enough respected hockey people opine on this matter to have changed my mind. I now feel there should be such an award.

You partially can credit Boston Bruins president Cam Neely for that. I remember hearing him in an April 2012 radio interview making a case for Zdeno Chara to win the Norris Trophy that season. The Bruins captain finished the 2011-12 season with 52 points (12 goals, 40 assists), 26 less than Erik Karlsson of the Ottawa Senators, who led all NHL defensemen with 78 points (19 goals, 59 assists). For Neely it was a perfect example of how scoring stats shouldn't always be relied upon when picking a Norris winner. "For me, I think the Norris Trophy, well, maybe they should add a trophy as far as best offensive defenseman," Neely said. His point: Chara shouldn't be overlooked for the Norris, which is awarded to the best all-around defenseman, because he prioritized playing defense over gaudy scoring numbers. Chara won the Norris in 2008-09 with 50 points (19 goals, 31 assists), 23 fewer than Mike Green of the Washington Capitals, who led defensemen with 73 points (31 goals, 42 assists).

Neely liked the precedent that was set. "[Chara] is so solid back there … he is in my opinion the best defender in the game," Neely said. "He can contribute offensively, but he doesn't put up ridiculous offensive numbers." Neely's words stuck with me. In his prime, who was a more disruptive defenseman on the ice than Chara (6-9, 250)? Teams would alter their zone entries when he was on the ice. That is a difference-maker, no matter how many points he scores.

Another player in that category is Columbus Blue Jackets defenseman Seth Jones, the No. 5 defenseman on the NHL Network list. He's scored more than 50 points once (57 in 2017-18), yet Tampa Bay Lightning coach Jon Cooper said of Jones in August, "It's remarkable to me with Jones … I don't have the answer whether he's been up for Norris trophies, but he should be." For players like Chara and Jones, a defenseman's first priority is to defend. Do it well and Norris consideration should follow. Meanwhile, the defenseman with the most points would win the new trophy.

Do you have a favorite game Mike Emrick called? -- @msilvers1979

Game 6 of the 2013 Stanley Cup Final, when the Chicago Blackhawks defeated the Boston Bruins 3-2. Doc's greatest skill for me was his ability to take fans on a roller-coaster ride with the ebbs and flows of a game. Never was that more evident than in this thriller. With 90 seconds left, the Blackhawks trailed 2-1 and looked to be heading home for a potential Game 7. But goals by Bryan Bickell and Dave Bolland 17 seconds apart, the latter coming at 19:01, left the TD Garden crowd in shock and Doc at his very best. His trademark voice cracking more as it got louder, you were pulled into the excitement just by listening to it as the clock ticked down on the Blackhawks' second Stanley Cup championship in four seasons. Doc wasn't cheering for a specific team; he was cheering for the drama of the moment. No one was better when that moment arrived than he was. Now that he has retired, I will miss those moments.