Mukhamadullin, Kravtsov, Chinakhov among those thriving in KHL 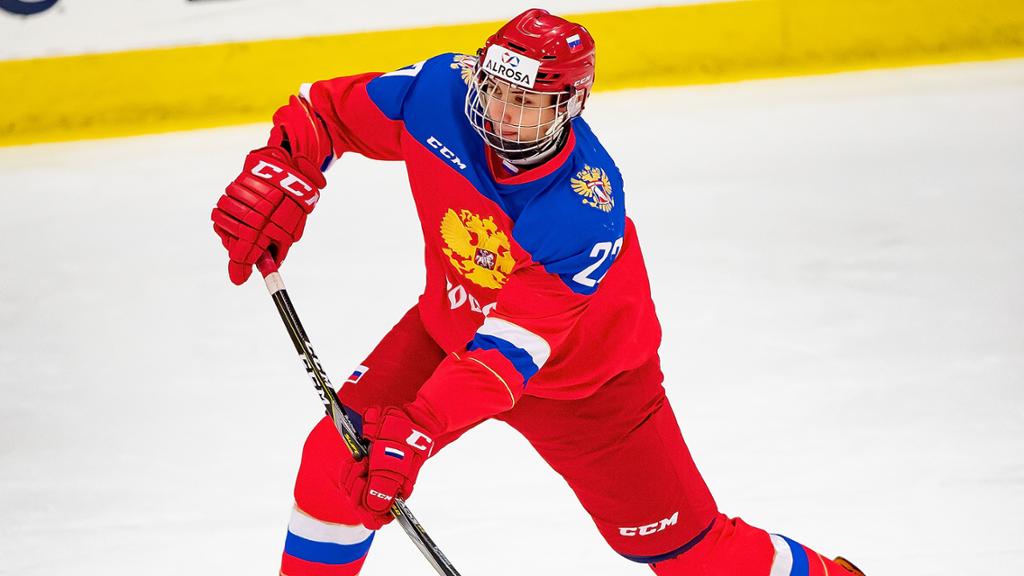 NHL prospects across the globe have started their 2020-21 season and are in the spotlight among fans and personnel across the League. Each Tuesday, NHL.com will examine one of the major professional leagues in Europe, detailing certain players to watch, as well as noting those from other European leagues who are playing well.

Shakir Mukhamadullin is off to a strong start in the Kontinental Hockey League this season after being selected by the New Jersey Devils in the first round (No. 20) in the 2020 NHL Draft.

The 18-year-old defenseman has scored seven points (two goals, five assists) and is averaging 13:09 of ice time in 24 games with Ufa.

"When you talk about Shakir, you see the rangy, almost gangly 6-foot-4 (178 pounds) kid playing last year as a 17-year-old and you really like what you see, and almost six, seven months after the pause you see a guy who's already taken fairly significant strides in his game," Devils assistant general manager Dan MacKinnon said. "He's on a really good KHL team in Ufa, one of the top teams, where you have to compete for your spot and your ice time. He's getting almost 14 minutes a night and this isn't the [American Hockey League] where top prospects are almost given the ice time until they show they can't handle it. In the KHL, you absolutely have to earn it."

Mukhamadullin has earned his ice time, in part, because of his high-end skill.

"He does have good IQ for the offensive side of the puck or the transitional side of the game with his natural ability to read when to jump and when to get up in the play," MacKinnon said. "It's not necessarily reckless; it's pretty well calculated and our scouts were drawn to that part of it."

Mukhamadullin has said he wants to be considered more of a two-way defenseman and is striving to improve in the defensive zone. Some of that will come with added strength and physical maturity.

"When we try to measure that side of the equation ... there's intent and willingness and coachability, and he has all those things," MacKinnon said. "Part of assertiveness as a mature professional defenseman is confidence in strength and playing against men. Our conclusion with Shakir was absolutely he's going to have to make improvements in his game in the [defensive] zone in terms of ending plays, separating guys from pucks and being assertive and physical by today's standards.

" ... You see this with some younger defensemen these days, that put no value in that part of the game, that just want to stick check their way through games in the [defensive] zone; that concerns us. That wasn't the case with Shakir. We feel the assertiveness will come with the physical strengths and maturity. ... The guy has a high motor, high aptitude for learning and wants to get better on the defensive side."

Four other NHL prospects currently playing well in the KHL:

The 19-year-old, selected by the Columbus Blue Jackets with the No. 21 pick in the 2020 NHL Draft, is fourth for Omsk with 13 points (seven goals, six assists) in 20 games. Last season, Chinakhov scored 69 points (27 goals, 42 assists) in 56 games to finish fifth in scoring in Russia's junior league.

Fedotov is fourth among goalies to play at least seven games in the KHL with a 1.71 goals-against average and a .940 save percentage. Fedotov, who turns 24 on Nov. 28, was selected by the Philadelphia Flyers in the seventh round (No. 188) of the 2015 NHL Draft.

Kravtsov, selected by the New York Rangers with the No. 9 pick in the 2018 NHL Draft, scored six goals in his first seven games and leads Traktor with eight goals in 16 games. The 20-year-old has scored 10 points and has a plus-7 rating while averaging 16:09 of ice time per game, major strides from last season when he scored three points (two goals, one assist) and was minus-4 in 11 games. Kravtsov, who agreed to terms on an entry-level contract May 3, 2019 and is on loan to Traktor, scored 15 points (six goals, nine assists) in 39 games with Hartford of the American Hockey League last season.

Marchenko has scored five goals in six games since Oct. 14, when he returned after two games with SKA's team in Russia's junior league, where the 20-year-old forward scored seven points (three goals, four assists). Marchenko, chosen by the Blue Jackets in the second round (No. 49) of the 2018 NHL Draft, has scored 10 points (six goals, four assists) in 14 KHL games.

Five other NHL prospects to keep an eye on:

David Gustafsson (Winnipeg Jets), F, Tingsryds AIF: The 20-year-old, who was loaned by the Jets to Tingsryds on Aug. 27, has scored 10 points (three goals, seven assists) in 11 games in Allsvenskan, Sweden's second division.

Arttu Ruotsalainen (Buffalo Sabres), F, Ilves: The 23-year-old, who is playing on loan from the Sabres, leads Liiga with nine goals and is tied for first with 15 points. He's averaging 20:59 of ice time in 12 games, third among Liiga forwards.

Moritz Seider (Detroit Red Wings), D, Rogle: Seider, who is playing on loan from the Red Wings, has scored five points (one goal, four assists) during a four-game point streak. The 19-year-old is averaging 19:05 of ice time in five games in the Swedish Hockey League.